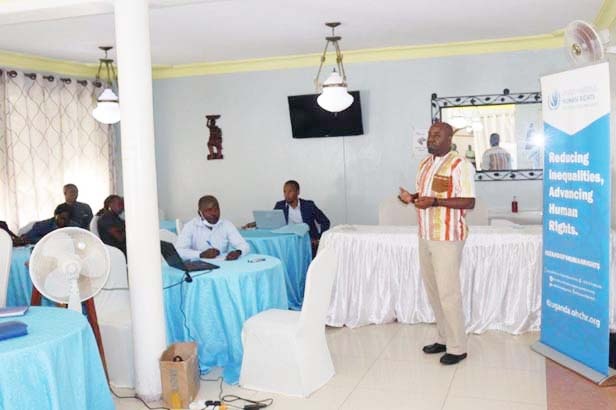 Photo: Bernard Mujuni, Commissioner for Equity and Rights at Ministry of Gender, Labour and Social Development

Arua | Masaka May 2022: With financial and technical support from the Office of the United Nations High Commissioner for Human Rights (OHCHR), the Ministry of Gender, Labour and Social Development (MGLSD) has embarked on the dissemination of the National Action Plan (NAP) on Business and Human Rights across the country begining in Araua and Masaka districts. The regional dissemination workshops are aimed at creating awareness of the NAP among key stakeholders at district level on their respective roles towards its adoption and implementation.

In his opening remarks in Arua, Mr Benard Mujuni, the Commissioner of Equity and Rights at the MGLSD,  highlighted the importance of joint effort in the implementation of the NAP. “Human rights abuses by business entities are illegal and unacceptable. There is an urgent need to quickly address these issues with the implementation of the NAP on Business and Human Rights.” Mr Mujuni said.

“OHCHR in Uganda pledges its commitment to not only supporting the development of the NAP, but also its dissemination. I call upon all stakeholders to reach out to the Office in case there is a need for technical support when handling any human rights related violations.” Mr. Emmanuel concluded.

Ms Ayikoru Sunday, the Vice-Chairperson Local Council IV Terego District,  highlighted the timeliness and importance of the NAP on Business and Human Rights that has essentially been presented at a time when West Nile region faces an increased number of human rights violations and abuses among business entities. There was not any framework for monitoring human rights violations of business entities.

“I am committed to taking up the responsibility of sensitizing the district on the NAP and mobilising fellow political leaders to do the same on every available platform. I call upon the MGLSD to increase financial allocation to facilitate the implementation of the NAP at the district level.” Ms Sunday said.

In 2016, the Government of Uganda committed to operationalising the UN guiding principles on Business and Human Rights and through the MGLSD with support from OHCHR , developed and adopted a NAP as part of their efforts to operationalize the guiding principles.
In efforts to popularize the implementation of the NAP ,OHCHR will work on strengthening district human rights committees to ensure that there is close monitoring and redress of human rights violations, especially by businesses. OHCHR will also continue to work with the Uganda Human Rights Commission (UHRC) and other actors to intensify advocacy for the enforcement of redress for human rights violations and abuses by business entities.

The regional dissemination meetings in Arua and Masaka were attended by 40 participants (11 females and 29 males) from the local government, the business community, Civil Society, religious and cultural leaders.