OHCHR consults on the national disability status report in Kalangala 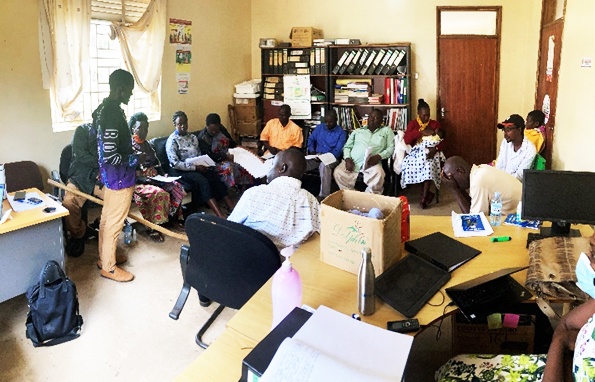 Photo: A Focus-Group Discussion during the consultations

(Kalangala 29-30 Mar 2022) Persons with disabilities (PWDs) face even more obstacles in hard to reach districts like Kalanga – one of the 64 inhabited islands on Lake Victoria. Transport costs are high, and access to justice, quality education and affordable and culturally acceptable health services remain huge challenges.

OHCHR in collaboration with National Council for Persons with Disabilities (NCPD), continues to consult with PWDs among others stakeholders in the islands of Bugala - the largest island of the Ssese Islands. During the two days of consultations, OHCHR team met with District officials on the situation of PWDs in Kalangala District. All district officials raised the challenge of high transport costs between the islands, and said it was affecting PWDs more, being “most often victims of crimes’’, which they find challenging to report for instance.

One police officer commented that because of transport costs “people cannot report cases and the police cannot investigate.” Especially for PWDs, who the police highlighted as being “most often victims of crimes, not perpetrators”, exhibiting clear inequality.

The consultations also included a focus group discussion with representatives of persons with different disabilities from Kalanga and the surrounding islands benefiting a total of 13 (5 females and 8 male). Underlining the underlying discrimination against PWDs is the attitude towards them. When the group members were asked if they had ever gone to the police because they had had their rights violated, one participant said: “We are so fearful. We are so scared. We are not seen as people.”

Many other challenges were identified during the consultations, including increased cases GBV affecting women and girls with disabilities (rape and defilement), lack of tools to facilitate access to financial services by PWDs.

The regional consultations come ahead of Government of Uganda’s report to the Convention on the Rights of Persons with Disabilities (CPRD) Committee due in October 2022. Uganda ratified the CRPD in 2008, and is therefore obligated to report regularly to the Committee on the status of the implementation of the Convention. The first report submitted by Uganda was reviewed by the Committee in 2016.

The concluding observations from the Committee inter alia, highlighted a number of areas where improvement is needed. With the support of OHCHR, the NCPD in collaboration with Ministry of Gender Labour and Social Development, has been working to compile its second report to the CRPD Committee. Six regional consultations have been carried out since September 2021, through interviews and compiling testimonies of PWDs from all over Uganda.