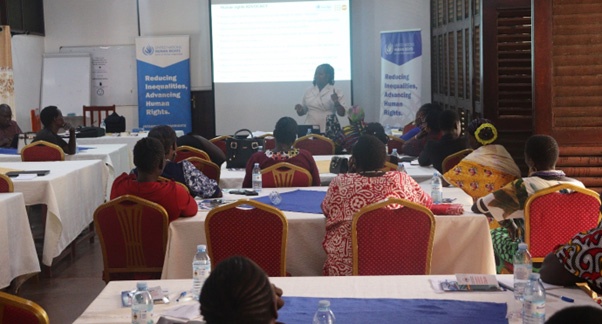 The Office of the United Nations High Commissioner for Human Rights (OHCHR) in Uganda in partnership with the Uganda Human Rights Commission (UHRC) convened a two-day workshop on forced widow inheritance with participation of 29 Women Human Rights Defenders (WHRDs) from all districts of Karamoja sub- region. The workshop in Moroto aimed at enhancing the knowledge and skills of WHRDs to identify, monitor, document, report, and advocate for human rights issues related to forced widow inheritance and creating a platform of grassroots WHRDs in the region for effectively addressing pertinent challenges that they are facing.

In the context of Karamoja sub-region, forced widow inheritance refers to a custom by which a male relative of a deceased husband inherits the widow of a deceased relative as his wife. Due to the patriarchal socio-economic structure and prevalence of child marriages in the region, some widows experience being inherited by their deceased husband’s male relatives or their own son(s) multiple times, where those who refuse are often harassed and ostracized from their communities and suffer social stigma as they are accused of being responsible for the death of their spouses.

“There is a belief in Karamoja that women are property once the bride price is paid. I was called a murderer by community members after having lost my spouses twice.” One of the widows lamented!

Forced widow inheritance is a harmful cultural practice perpetuating gender inequality and violence against women under international law. The Protocol to the African Charter on Human and Peoples’ Rights on the Rights of Women in Africa recognize the widow’s rights including the right to remarry by her choice.  The 1995 Uganda Constitution provides the prohibition of discriminatory cultural practices; however, this silent form of gender-based violence (GBV) has been perpetrated with little interventions under the current national policy and programme combating GBV.

The workshop discussions highlighted suppressed/silenced voices of widows and serious human rights implications of forced widow inheritance, the lack of a comprehensive study on the harmful practice, and limited interventions to ensure the protection of widow’s rights. Participants appreciated this initiative because it was the first occasion to specifically discuss issues and challenges related to forced widow inheritance and pertinent needs for widows. To tackle this socially harmful practice, participants recommended among others, strengthening the capacity of grassroots WHRDs, conducting a base-line study on forced widow inheritance, focused community sensitization and awareness-raising and advocacy for integration of this form of violence in the national GBV strategy and programme.

OHCHR, throughout 2023, plans to strengthen the capacity of grassroots WHRDs and develop an advocacy strategy for fighting against forced widow inheritance, which is expected to advance the ongoing efforts towards empowerment of women and girls as envisaged under UN Sustainable Development Cooperation Framework (2021-2025).