Media practitioners urged to upskill, take up their place and claim their rights in the appropriate fora 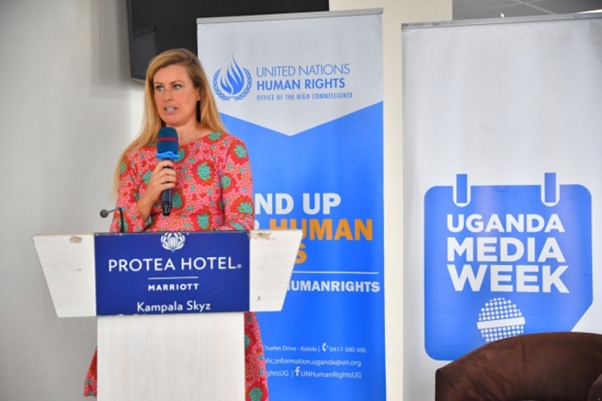 Kampala | November 2022: Media practitioners in Uganda have been urged to know their rights and access justice in courts of law. This came from the Deputy Country Representative Office of the United Nations High Commissioner for Human Rights (OHCHR) in Uganda at a premier journalism conference by Media Focus on Africa - Uganda at the Naguru Skyz Hotel, 3rd to 4th November 2022. The theme for 2022 annual meeting was ‘Journalism, Innovation and the Future’.

Ms. Grace Pelly underscored the importance of free and independent media in Uganda and the need for meaningful conversations towards contributing to a better enabling environment for journalists and civil society organizations to thrive.

The meeting is regarded as one of the largest gatherings of journalists in Uganda as various stakeholders met to deliberate on critical issues affecting the media industry.

The conference was co-hosted in partnership with Media Focus on Africa – Uganda and with  Deutshe-Welle (DW) Akademie and internet policy centre-Collaboration on International ICT Policy for East and Southern Africa (CIPESA).

In her closing remarks, Ms. Grace Pelly, said that the Human Rights Network for Journalists in Uganda had reported various journalists being beaten, arrested, detained, and confiscation of their equipment such as cameras, & audio recorders. “These human rights violations and abuses often deter journalists from continuing their work and increasing self-censorship, and consequently depriving society of important information.” Ms. Grace noted.

“I call upon the media practitioners and journalists to uphold values of professionalism and engage constructively in dialogue on the ongoing restrictions on freedom of expression, the clampdown on social media, arbitrary arrests, and torture of journalists. The UN Human Rights Office remains available to facilitate such dialogues.” Ms. Grace concluded.

The key topics debated during the meeting included: Media viability, women in media, internet regulations, digital inclusion, funding for media development among others. Ms. Jan Ajwang-programmes manager at Media Focus on Africa, noted that while the media was recovering from the impact of Covid19 on journalism practice- the conference was timely to chat a clearer way forward.

“A lot is pointing to reinvention and innovation, but it has to be tested and contextualized for Uganda, in what works and what is the future of journalism in our context? We have previously seen great suggestions come out from this conference, when journalists meet and talk and that is still our expectation this time.”

DW representative said “The goal is to ensure that beyond discussing challenges facing the media, stakeholders can also agree on realistic solutions to address the different challenges and use these solutions to contribute to a better environment for the journalism practice”

Mr. Robert Ssempala, the Executive Director of the Human Rights Network for Journalists in Uganda said that journalists have become more assertive and aware of their rights and can stand for their rights. “Some perpetrators are powerful and benefit from gross violations against journalists by buying their way out. Journalists should acquire knowledge on how to access the different available support mechanisms,” Mr. Ssempala said.

Mr. Joachim Buwembo, a veteran journalist for 33 years working with the Observer Newspaper said that there is a need for journalists to swiftly take up their space or risk replacement by the fast-growing digital space used by everyone with a smartphone, not in a journalistic manner. “It is high time journalists upskill themselves, cover the right content and share relevant news to meet the ever-changing audience needs,” Mr. Buwembo concluded.

The Media Week Conference was attended by 70 participants (32 females and 38 males) that included representatives from the media, Civil Society, Non-Governmental Organizations and development partners.