KRPM in Abim addresses the human rights situation in Karamoja 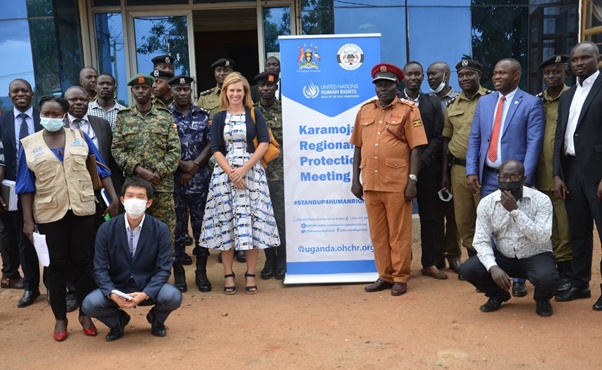 Photo: Participants at the 46th session of the KRPM in Abim District

In her remarks, the OHCHR Deputy Country Representative, Ms. Grace Pelly highlighted the UHRC and OHCHR’s contribution, with support from other UN agencies for supporting the KRPM since 2010, which has been instrumental in facilitating dialogue on human rights protection and promotion among stakeholders in the region. She underlined the importance of closer and more concerted coordination among stakeholders to address fragile human rights situation in the region facing high levels of vulnerability and increasing insecurity.

During the meeting, OHCHR and UHRC raised concerns over rising number of allegations of human rights violations committed by security agencies, in particularly UPDF and emphasized the importance of a prompt, impartial and effective investigation into these reported cases. UPDF, in response, presented some progress towards accountability for alleged violations. Both institutions urged all stakeholders to prioritize efforts of mainstreaming human rights into all government programmes including disarmament operation to fulfill their human rights obligations effectively.

The Napak District Police Commander underlined his office’s efforts to combat child trafficking. It was reported for years that many children in Napak district are prone to trafficking compared to other districts in the region. During the last five months, the Police carried out community sensitization activities in three sub-counties with the high record of trafficking cases, intercepted 69 children being trafficked and arrested 7 suspects involved in such criminal activities.

The Abim Senior Probation and Social Welfare Officer reported with concern that 1,754 teenage pregnancies were recorded during the second half of 2021 mainly due to COVID-19 restrictions. The district also carried out inspection of child labour at mining sites in the district, stressing greater efforts to increase awareness on negative effects of child labour and reduce compound push factors, driving children into child labour.

The KRPM is a regional platform enabling protection actors to discuss and assess human rights issues and concerns in the Karamoja sub-region. The quarterly meeting is attended by UPDF, Justice, Law and Order Sector (JLOS) institutions, local district authorities, civil society organizations as well as UN agencies. It has contributed to enhance the capacity of the UN and responsible Government institutions in the realization of access to justice and redress.