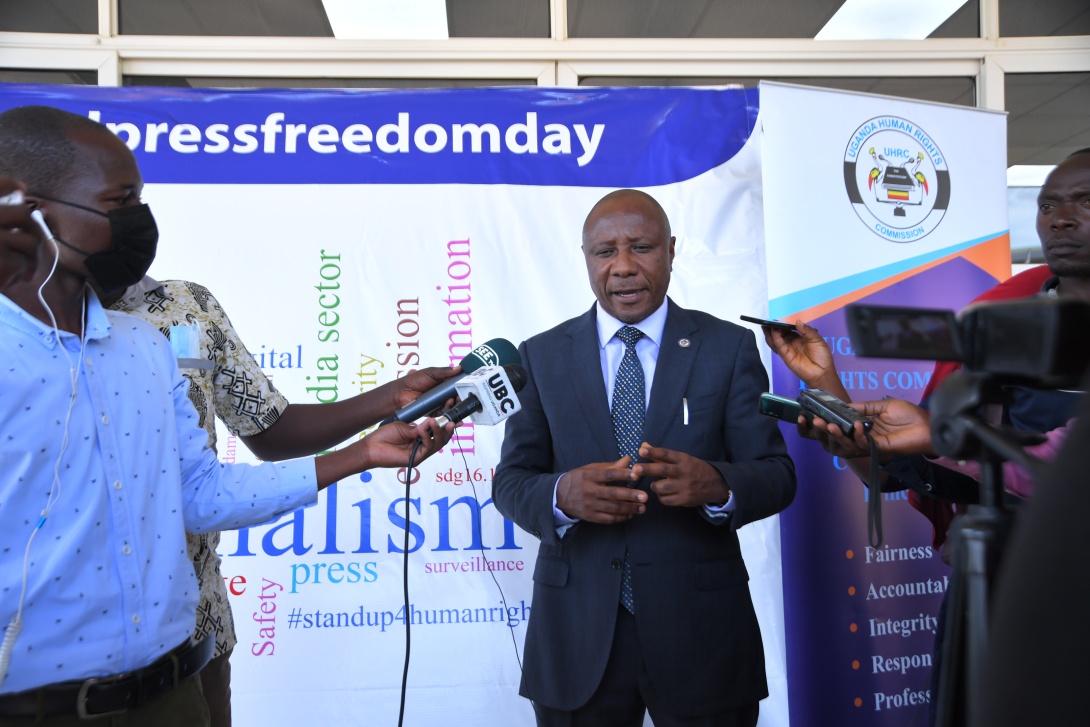 The dialogue which took place in the form of a hybrid event was attended by 120 participants (62 males and 58 female) from Government Ministries, Departments and Agencies, Civil Society Organizations, NGOs, Human Rights Defenders, and members of the Media, participating both physically and online.

Under the global theme: ‘Journalism Under Digital Siege’ the occasion provided an opportunity to discuss the impact of digitization on journalism and explored how journalism can be saved from the digital siege. The journalists raised concerns about security brutality and other violations against media professionals and pleaded reinforced ties with Government via the Ministry of Information Communication Technology and National Guidance.

The State Minister for National Guidance, Hon. Godfrey Kabbyanga said that the Government of Uganda pledged to work with umbrella media organisations to establish internationally acceptable minimum reporting standards for journalists. He inter alia, advised media professionals to speak with one voice.

“Torturing of journalists is barbaric, primitive and ultimately uncalled for,” Hon. Godfrey emphasized.

Ms. Susan Namondo, the UN Resident Coordinator in Uganda noted that the global statistics of Uganda’s Press Freedom had become worryingly low as the country declined in position.

“To work as a journalist today, one requires a great deal of courage as many of them have experienced a lot of abuse. They have been threatened, jailed tortured, beaten and others killed. Free press is a key element of any democracy because it is a foundation for other rights,” Susan said.

Mr. Robert Kotchani, the Country Representative at UN Human Rights expressed that journalists face a lot of challenges as front liners and that policy and regulations tend to restrict media freedom, the impact which is more on the journalist. He called upon the media fraternity, to display high standard of professionalism in their daily endeavours and engage constructively in a dialogue on the apparent intolerance by the Government with media practitioners on freedom of expression.

“It is vital to conduct a constructive dialogue between the Government with media practitioners on freedom of expression, the clampdown on social media practitioners, the excesses brutality of security agencies especially the Police and the UPDF, arbitrary arrests, and torture of journalists. We look forward to a transformed and prosperous Uganda – where journalism is not a crime, and press freedom is a right and not a privilege,” Mr. Kotchani noted.

Ms. Mariam Wangadya, the Uganda Human Rights Commission (UHRC) Chairperson said that the duty of the state was to find ways of promoting what facilitates the enjoyment of rights of press freedom.

“The need to protect the rights of journalists is beyond vital for the development of the fourth estate and the knowledge gap within the public. I pledge on behalf of the commission to take up recommendations shared today and hold duty bearers responsible to take the necessary action,” Mariam said.

Going forward, the UN Human Rights Office will liaise with relevant organisations of journalists and facilitate engagements with the Ministry of Information Communication Technology and National Guidance on relevant matters. The UN Human Rights Office will also step up on efforts in the area of capacity-building for journalists on thematic to be commonly agreed upon.