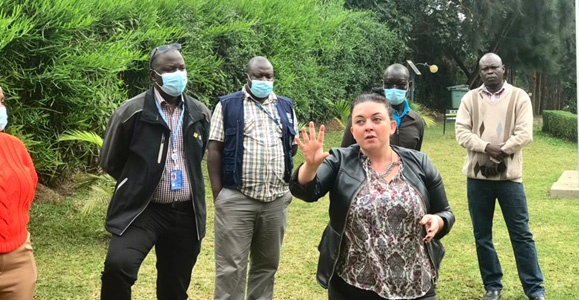 The training aimed at enhancing the capacity of the UNAC teams in gender mainstreaming, application of the human rights-based approach, prevention and response to sexual exploitation and abuse, as well as strengthening coordination and planning for the same.

Ms. Kathryn Wilkes, the Gender Advisor in the UN Resident Coordinator’s Office emphasized that the UN in Uganda has a zero-tolerance policy for Sexual Exploitation and Abuse (SEA) and is committed to actively preventing and responding to SEA by UN staff, implementing partners, and contractors.

Ms. Lisa Dardis, the Coordination Analyst at UN Women encouraged UNAC teams to work together towards preventing and reporting cases of SEA.

"We cannot have the advancement of SDGs without the protection of human rights. It's vital to promote human rights in communities and build their capacity to say NO to sexual harassment, sexual exploitation, and abuse," Lisa emphasized.

In his presentation, Mr. Christopher Ogwang, the Human Rights Officer at the Office of the United Nations High Commissioner for Human Rights (OHCHR) in Uganda encouraged participants to always apply a human rights-based approach in their programmes.

“The core of the Human Rights-Based Approach to development is putting people at the centre of all development efforts. Therefore, in the design and implementation of programmes by UN agencies, the objective should be focused on the realization of human rights.” Christopher noted.

In his closing remarks, Mr. Philips Lim Lim, Chief of Field, UNICEF thanked participants and facilitators for addressing the knowledge gaps on key human rights and gender concepts. He encouraged participants to walk the talk and practice PSEA and apply all the knowledge obtained from the training.

The HRGAG, under the overall leadership of the UN Resident Coordinator and direct leadership of UN Women and the Office of the United Nations High Commissioner for Human Rights Country Representatives, provides strategic analysis and technical, coherence and mainstreaming support to the UN Country Team and the UN System on issues related to human rights, gender equality and women’s empowerment within the UN’s programmes, operations and capacity building.

UNAC through the UN reform agenda promotes delivering as one and helps ensure that the United Nations in Uganda’s support at the field level is effectively coordinated, more efficient and effective to deliver on the UN’s commitment as well as its normative and protection agendas.