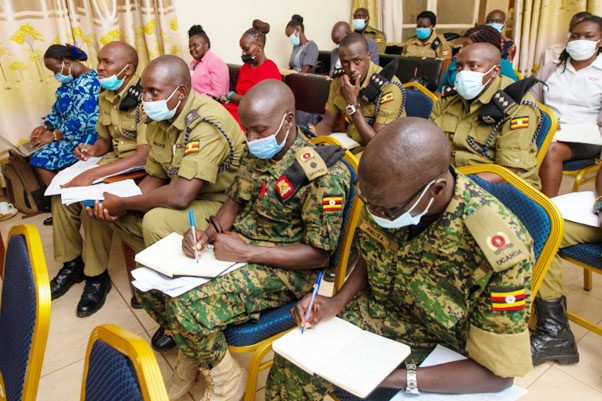 Photo: Participants at the 47th KRPM

In his opening remark, the OHCHR Country Representative, Mr. Robert Kotchani highlighted OHCHR’s contribution to the KRPM which has facilitated a constructive dialogue on human rights protection among stakeholders and strengthening their commitments to fulfil human rights obligations in Karamoja region since 2010. Mr. Kotchani expressed a deep concern for several allegations of serious human rights violations having resulted from the latest disarmament operations across the region. He called on all security operatives to escalate efforts to prevent human rights violations and to optimize visible and transparent accountability mechanisms to demonstrate the victims and communities that human rights violations are not left unattended.

During the meeting, OHCHR and UHRC raised concern over the rising number of cases of human rights violations that have been observed and reported since the full-scale disarmament operations begun on 16 May 2022. They included overcrowding in detention facilities; arbitrary arrests and detention; torture and ill-treatment; arbitrary killing and deprivation of property. Both institutions called for the strengthening of coordination among stakeholders involved in the disarmament operations to ensure that the rights of detainees are protected. They further called on security agencies to permit unfettered access to suspects in all detention facilities.

In response, UPDF and UPF presented some progress towards accountability for alleged violations. Both security agencies reported that disciplinary actions had been taken against perpetrators, while some had been arraigned in court and prosecuted. Both institutions expressed further commitment to address the reported allegations and minimize risks of further violations.

The UPF Ag. Commissioner in charge of sexual and children offences department discussed the challenges that victims of gender-based violence face in accessing justice including the inaccessibility of Police Form 3. She noted that health care workers are still asking for money to examine victims of gender-based violence, normally a fee between 15,000 UGX and 20,000 UGX despite the repeated Ministry of Health’s circulars which stipulate such service is provided free of charge. In terms of capacity of health workers, she raised a concern over frequent transfer of health workers to other duty stations outside the region after they had been trained, posing a challenge to effective service delivery.

The KRPM is a regional platform enabling protection actors to discuss and assess human rights issues and concerns in the Karamoja sub-region. The quarterly meeting is attended by UPDF, Justice, Law, and Order Sector (JLOS) institutions, local district authorities, civil society organizations as well as UN agencies. It has contributed to enhance the capacity of the UN and responsible Government institutions in the realization of access to justice and redress.