OHCHR and UHRC hold a Training of Trainers for UPDF soldiers 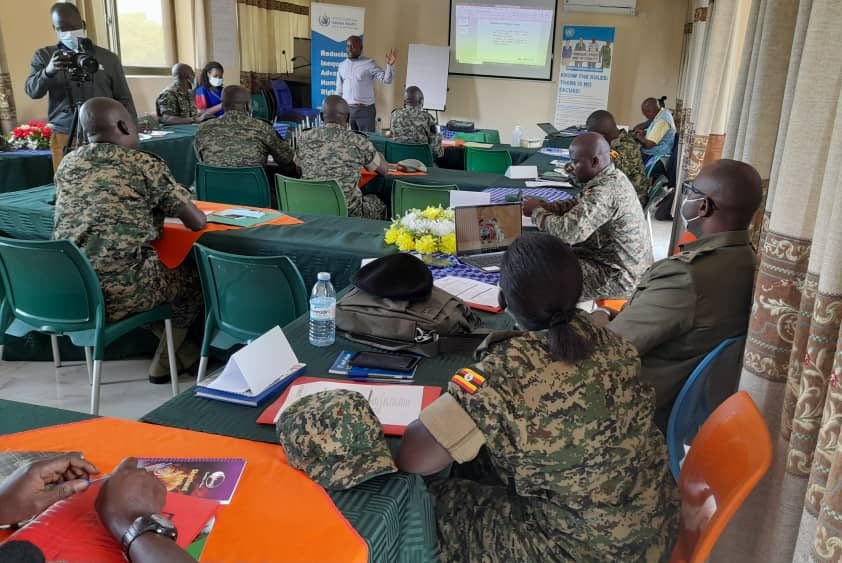 Photo: A cross-section of UPDF soldiers in the training of trainers

The training is a joint initiative of the UN Human Rights Office, and the Uganda Human Rights Commission (UHRC). It is a result of the engagement together the Commander of the UPDF 4th Infantry Division in Gulu.

In his opening remarks, the UN Human Rights Office Country Representative Mr Robert Kotchani noted that “security forces play a crucial role in the protection and promotion of human rights and are therefore human rights defenders.” He added that the “constant engagement with the security institutions has demystified the years many civilians had, especially of the Army.” That is why, he concluded, the UN Human Rights Office in Uganda, would “extend continued support in ensuring that security forces have the necessary knowledge, skills and capacity in promoting human rights in their day-to-day operations.

“Over the years, there has been a lot of positive changes in human rights observance by the UPDF.” She said. Adding that the actions or omission of the security can have a positive or a negative impact on the State’s ability to fulfill human rights. “Therefore, in all that you do as individuals or as an institution, there is need to be mindful of this critical role to contribute to state compliance with human rights obligations.” She advised.

On his part, Lieutenant Colonel George D Amandi retaliated the commitment of the UPDF to enforce the obligation to protect, respect and fulfil human rights and observed that a few among them “who error are brought to book. “We do not condone human rights abuses. We enforce human rights even among ourselves. Any officer who errors is handled accordingly.” He said.

The representative of the Resident District Commissioner, Kitgum District Mr Bongomin Wellborn also reminded participants to take human rights far and wide to reach the grassroots person in order to develop and inculcate a mindset change for a respect of human rights culture to take effect.

The UPDF officers trained during this training of trainers are expected to impart the skills and knowledge acquired to their colleagues. The necessary documentation has been compiled and distributed to participants accordingly and both OHCHR and the UHRC pledge support in that endeavor.