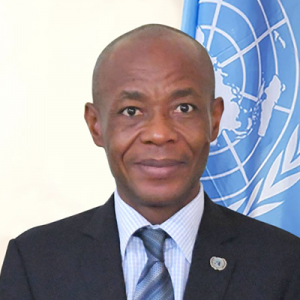 Robert Ayeda Kotchani has been working with the UN Office of the High Commissioner for Human Rights (OHCHR) for the past twelve years. In 1999, he started his international career as Legal Officer with the African Commission on Human and People’s Rights in Banjul, The Gambia, where he worked for eight years. From 2006 to 2009, he worked for OHCHR in Uganda, where he opened the Karamoja regional office in Moroto (Northern Uganda).

He has subsequently worked in several country and regional offices of OHCHR, as Deputy Representative in Addis Ababa, Ethiopia and Yaounde, Cameroon, as well as in Bujumbura, Burundi, where in 2014/15, he led as Acting Representative of the High Commissioner the transition from the United Nations for Burundi (BNUB) to the OHCHR country office in Burundi. Mr. Kotchani’s most recent position was Human Rights Officer with the United Nations Regional Office for Central Africa (UNOCA) in Libreville, Gabon.

Mr. Kotchani holds an LLM in International Law and an LLB in English, both obtained from the University of Abomey-Calavi in Benin.